Building a tree house is every child's dream, but an adult is needed to make it a reality. If you're going to indulge your kids and erect the ultimate play fort in the backyard, try a simple, worry-free method.

The daunting part about building a tree house is attaching it, safely, to a tree. To do that right -- in a way that won't hurt the tree and won't cause the tree house to fall apart in a few years -- takes an advanced degree in engineering. However, an easier approach it to build the tree house around the tree. That way, when the trunk sways in the wind and the limbs grow and twist over time, the tree house (and your kids inside it) will be safe.

Things to Keep in Mind

Safety is number one when building a tree house, so make sure to follow these basic principles:

There are various legalities and neighborly relations to consider, as well:

This tree house plan does not require attaching the structure directly to the tree, allowing it to be adapted a wide range of situations. It is similar to constructing a shed except it is elevated off the ground and has a hole in the roof and floor to allow the trunk to pass through.

Click on the images for printable plans based on the instructions below. If you have trouble downloading the plans, use the Guide for Adobe Printables article to troubleshoot. 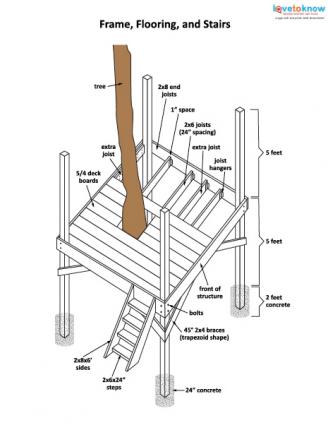 Rather than a typical shed floor, this design uses a floor similar to a deck since the structure needs to be weatherproof inside and out -- there is no way to seal out moisture with a hole in the ceiling for the tree trunk. The deck is accessed by a ladder-like set of stairs. 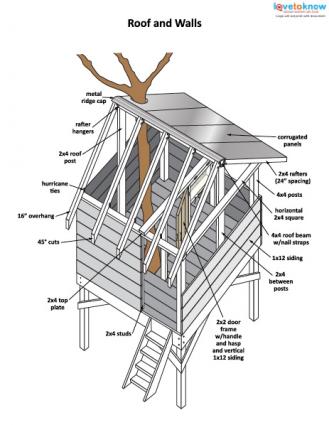 The tree house has a simple pitched roof supported by the four corner posts that are already in place and two 2'x4" posts that will be installed to support the peak of the roof. The rafters will rest on a horizontal square of 2"x4"s mounted to the top of the existing corner posts.

Four 2"x4" studs must be installed to frame the front wall of the tree house where the window and door will be located -- these will be mounted to the extra floor joist that was installed 3 feet back from the front of the structure. A couple of horizontal 2"x4"s also need to be installed to support the siding on the front of the balcony, but the roof supports will suffice as framing for the siding on the other walls of the structure.

This is a very simple tree house design that can be customized in many different ways.

Once the tree house is built, your children will have a blast decking it out with kid stuff. It's a great spot for playing tea or a sleepover -- you might even find yourself joining in the fun!