Sandblasting is an effective way to remove paint from a variety of surfaces though it is a messy and potentially hazardous job. Knowing the right applications for the technique is the key to getting the results you want.

Sandblasting makes use of an air compressor to shoot sand at a high velocity toward an object. It has various applications but the removal of paint is one of the most common.

It's a feasible DIY project and sandblasting equipment can be purchased or rented at most home improvement centers. However, it is so messy and potentially dangerous that you may want to consider hiring a professional sandblasting service rather than attempting to do it yourself.

Sandblasting can be used to remove paint from any object that will hold up to the intense abrading force of sandblasting. Brick, concrete and metal surfaces generally fall into this category.

Sandblasting can be used to remove paint from wood though it will cause pitting and scarring on the surface of the wood. If that's okay, it may be an appropriate technique for removing paint from a wood surface. The scarring effect on wood can also be used strategically as a type of artistic finish.

Sandblasting is an extremely messy process. A huge plume of sandy dust will emanate from the work area and coat everything around it. It can be done indoors as part of renovation work, but it will create a big clean up job, so it's usually restricted to exterior work where everything can be washed down with a hose. 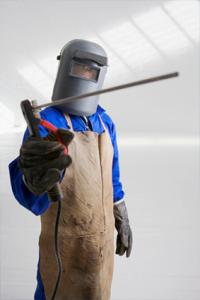 The fine dust comprised of sand and little bits of paint created by sandblasting is very hazardous to breathe, making a respirator an essential safety device. Tight fitting goggles are also important - swimming goggles or a snorkeling mask can be used.

Ideally, a full body abrasive blast suit is worn while sandblasting, but full length clothing, close-toed shoes and a bandanna is the minimum clothing required. The dust will find its way inside any space between clothing and skin and can cause skin irritation.

Keep Children and Pets Away

The work area should be off limits to animals and children as getting hit with sand at high pressure can cause serious injury.

Do Not Remove Lead Paint

If there is any question as to whether the paint being removed could have lead in it, sandblasting should not be used to remove it. Lead was banned from paint as of 1978, but if there is a chance that the surface you're working with was painted in the late seventies or before, have the paint tested for lead before sandblasting it.

Most sandblasters for home use are essentially kits that are used in conjunction with an air compressor. The kit includes a hopper to hold the sand, an air hose to attach it to the air compressor and a special nozzle designed for sandblasting.

The more powerful the air compressor, the stronger the spray of sand will be and the more effective your efforts will be. A pressure of 50 psi is the minimum needed for sandblasting though 100 psi is preferable.

Most smaller air compressors can only maintain that type of pressure for a few minutes before shutting themselves off while they re-establish their pressure, so the job will proceed much faster and more smoothly with a large air compressor. These can be rented at most tool rental centers along with the sandblasting kit.

Sand and Other Blasting Materials

The sand used for sandblasting needs to be dry and of a very fine and consistent texture. Home improvement centers may sell special sandblasting sand, but products labeled as playground sand are typically effective. Tiny plastic beads, crushed walnut shells, and baking soda can also be used in sandblasters.

The process of sandblasting is pretty straightforward once you have everything prepared. Everything in the vicinity should be covered with a tarp unless you don't mind it being covered with dust. Tarps also allow you to collect the sand afterwards and reuse it, though you will have to pass it through a fine sieve to remove any larger debris.

There is no special secret to sandblasting success, other than perhaps your patience with what is a very messy process. If at any point you feel like you're in over your head, don't hesitate to pick up the phone and call a professional.