Water in the crawl space of your home is nobody's idea of a good time. It can damage anything you have stored down there and lead to serious rot and mildew problems. Here's how you deal with it.

Cleaning Up the Mess

The first step is to get rid of the water; then you need to dry out the crawl space. In addition to equipment like pumps and fans, a pair of rubber boots, flashlight, and extension cord are likely to be necessary.

Removing the Bulk of the Water 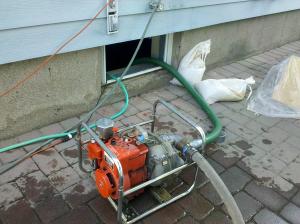 A pump is the primary tool for getting water out of your crawl space. Most pumps have to sit on dry land and have a tube that is submerged to suck out the water. There are also submersible pumps, which sit directly in the water. Either will work.

Low volume pumps are available for less than $100 from any home improvement store and are an essential item if you live in a flood prone area. You can also rent pumps from tool rental centers, which will allow you to have a larger, more powerful pump for one time use for less than the cost of purchasing a basic model. Any pump will do the job, however, it's more a matter of how long it takes.

First, identify the low point in the crawl space to place the pump. If your crawl space has a dirt floor, you should set a brick, paver, slab of wood or other stable support (roughly one or two inches thick) under the pump inlet (or the pump itself for submersible pumps) so it is not resting on soil, which will clog it.

Attach the hose provided with the pump to the outlet. This is typically a 1-1/2-inch flexible tube about 20 feet long. If the distance to the nearest area where the water can be discharged without flowing back into the crawl space or causing other damage is farther than the length of the hose provided, extension hoses are available wherever pumps are sold.

Then find a way to route the power cord to the nearest electrical outlet without letting it dip into the water. This may involve looping it over existing ductwork, conduit or pipes that are attached to the bottom of the floor above the crawlspace. when you plug it in the pump should power itself on. Let it run until all the water has been discharged. 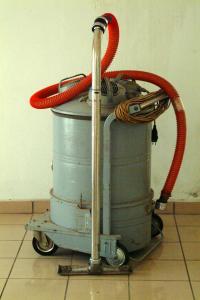 Removing the Last Bit of Water

At this point there will still be a bit of water remaining in the lowest point of the crawlspace below the level of the object that the pump was sitting on. The most practical way to remove the remaining water is to use a wet vac. These can also be found at any home improvement center or tool rental center.

Simply turn on the wet vac and suck up the remaining water. It's okay if a bit of mud and debris get sucked up with it. Once the canister of the wet vac becomes full, take it outside and empty it. Continue the process until all standing water has been removed.

Drying Out the Crawl Space

Once you have the standing water out, it's imperative to get rid of the residual moisture. The crawl space will dry very slowly on its own, but mold and rotten wood may develop before it has time to dry. The main solution is to use fans to dry things out. 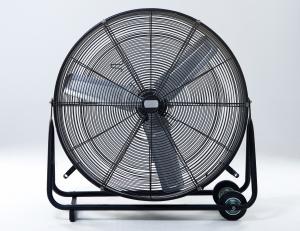 Standard house fans are generally not effective - you need the biggest, most powerful fans that can fit in the crawl space. These industrial type fans are quite expensive to purchase, so most people choose to rent them from a tool rental center. The more fans you use, the better, but your budget may ultimately dictate how many you set up. Using too many on one electrical circuit can cause the circuit to blow, as well, so try to plug them in on separate circuits if possible.

The first priority is to place a fan anywhere that is particularly wet (near the low point, for example) or where wood or other objects that hold onto water, like insulation or sheetrock, are located.

Besides these priority areas, it's wise to set one fan up at the entrance to the crawl space (blowing outward) and another one at the far end from the entrance next to some other opening where fresh air comes in, such as a foundation vent.

Leave the fans running day and night until the crawl space and everything in it is dry to the touch.

Once you've got everything cleaned up, the natural question is, How do I prevent this from ever happening again? The answer depends on the source of the flooding and the particulars of how the home is constructed and the lay of the surrounding land. 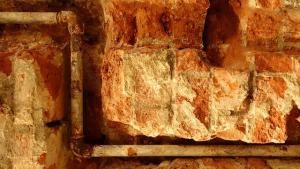 If damaged piping was the cause of the water, it would be wise to have all the plumbing checked. Both water supply lines and sewer drain lines are typically located in a crawl space. Related problems could include: 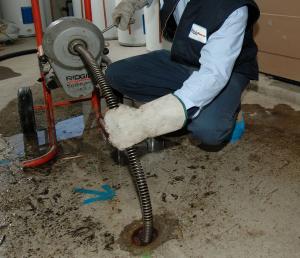 Finally, some crawl spaces are outfitted with a floor drain at the lowest point to allow any water that ends up in the crawlspace to drain away freely. These can become clogged over time, but a plumber can clear it for you using an industrial strength drain snake.

Always use a licensed, bonded and insured plumber. Many plumbers will offer the inspection for free if you use them to perform any needed repairs.

Any water originating from outside the house can be intercepted by a drainage system installed on the outside of the foundation before it gets into the basement. 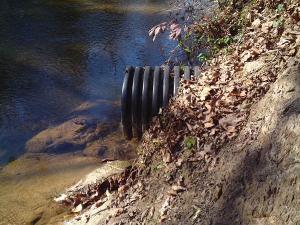 Commonly known as French drains, they consist of plastic pipes with holes in them that are buried in a gravel-filled trench. The pipe must be set in the trench below the level lowest point in the crawl space to keep water from seeping into through the ground. Somewhere downhill from the house the drain pipe must have an outlet, which is often into a drainage ditch.

French drains are typically installed on the uphill sides of the house to intercept groundwater that would otherwise end up in the basement after a heavy rain. However, older, cheaply built houses are not always outfitted with a French drain even when they should be.

French drains also have a limited lifespan before they become irreparably clogged with sediment and tree roots.

There should always be a clean out port somewhere aboveground where a drain snake can be inserted to clean them out. Severely clogged drains must be replaced, however.

In low lying areas where the crawl space is at or near the level of the water table, neither floor drains nor French drains are feasible solutions to flooding problems. In this case, the water needs to be pumped out. Instead of waiting until there is an emergency and pumping the water out with a rented or hastily purchased pump, the pump can be permanently installed below the floor of the crawl space.

This is a project for a professional contractor, but in essence, it involves excavating a pit below the floor of the crawl space to install a pump that is activated by a float valve whenever water enters the pit. That way the water will be removed automatically before it ever builds up to the point where it would begin to wet the floor of the crawlspace.

Dealing with water in your crawl space is never fun, but it's something many homeowners are forced to confront at some point. No matter the origin of the water, there are ways to clean it up and acting quickly is the best way to minimize the long term damage.

0
Comments
© 2006-2020 LoveToKnow, Corp., except where otherwise noted. All Rights Reserved.
Dealing With Water in a Crawl Space